The phallic fish in the dream had teeth which puzzled me… but it did not click at all till I read a few moments ago… “just as the sacred galeor (sharks) are said conceive to procreate in an irregular way, namely through the mouth”!… I’ve always known that queerness as well as its shame, its religious meaning  for me, through the phallic symbol – also that it stood somehow for self-fertilisation, virgin birth and culture. But I never expected to have it thrust down one’s throat with such exactness

-Michael Tippett, in a letter to a friend from February 1944 (quoted in Masculinity and Western Practice) (photo and drawing by author)

A 23 cm long, 5 cm wide (just wide enough to wrap one’s hand around), smooth prehistoric (≈ 8,000 B.C.) carved chert fish. Found in the slopes of the Dead Sea in 1977, it is now laying around in the archives of a foreign research institute in Amman, together with an unread 2011 report by an archaeologist who deems it “deserves to be in a museum”. Archaeology rarely goes beyond the Indiana Jones rhetoric: find – take – exhibit the pretty stuff (plus the occasional “study the bone and soil data” for the entertainment of those interested in that). The dry description of the object’s find-site and its context (“Many enormous snails lived and died in this excavated face and may have contributed to the sherd being about two feet below ground level. (…) The worked flints in the area are of particularly fine workmanship, quite unlike the many flints of later Neolithic periods found her and there all over the rift valley.”) was yet more evidence that most archaeologists are just interested in: the boring. Talk of sand and snails and flints sound scientifically valid. Yet archaeology is no science: the interpretation of the object is subject to the aspects the interpreter deems significant. And what was significant to me was not the dust. It was the materiality of the fish. Rather than dry archaeology, how about a wet one?

… Oh the horror, smooth long objects can be nice to touch…

By feeling the material qualities of ancient objects, rather than studying them pseudo-objectively in a pseudo-scientific lab, we may actually come closer to understanding their use. What a surprise: interpreting human culture by using a little bit of our own humanity might tell us more than studying an artifact as though it were a microbe. And from my human approach to the prehistoric fish, I reached the following inference: this was no innocent fish, if there ever was such a thing.

There is always a danger in attributing sexual meaning to the foreign cultural artifacts, past and present. Western academics and goddess enthusiasts from the 19th and 20th centuries are wont to go on diatribes about fertility cults of the East without providing much evidence. Hence books such as Fishes, Flowers & Fire as Elements and Deities in the Phallic Faiths and Worship of the Ancient Religion of Greece, Babylon, Rome, India, etc.  affirms, with more or less accurate references, the frequent occurrence of fish symbolism throughout the world. Even the 1961 Encyclopaedia of Sexual Behavior uses the pseudo-scientific generality: “it is believed today that the custom among Semitic peoples of eating fish on Friday originated from the ancient idea that a fish diet greatly increased sexual power.” One must be cautious to not dwelve too much into these ultimately onanistic theories.

Yet. Fish do indeed provide a metaphor for human genitalia- fish are squiggly, wet, firm, and smell… fishy—and there is evidence that ancient cultures did indeed associate them with sexuality. The Greek delphis (dolphin) was etymologically related to delphys, (womb), and Aphrodite as well as Cupid were represented in the company of dolphins (by Greeks and Romans). The association of fertility/sex goddess with fish was not a Greek innovation: as with many elements of Greek culture, it may have been adopted from the Near East, where fish are depicted with the goddesses Atagartis in Syria and Allat in Arabia and Nabatea (the nomadic kingdom which built Petra, in Jordan, hence creating a geographical link to our phallic fish). Indeed, it makes logical sense for fish,  found in water, to be associated with fertility in cultures in the desert.

Without taking on a 19th century Freudian discourse, we can see in the fish a very human metaphor for both the phallus and the vagina, across many societies. A metaphor due to its actual physical qualities, its touch and smell, and not just psychoanalytical imagination. In modern-day folklore from northern Brazil, an unexplained pregnancy is attributed to the boto-fish. Many female goddesses from the Near East have a connection to water, and carry vessels which sometimes overflow with it (with the obvious interpretation of fertility). What goes in water? Fish.

Phallic symbolism is by no means rare in the prehistoric record. Men and women have the inclination to draw genitalia, be it on the walls of Lascaux or on the walls of the New York metro. The book The Prehistory of Sex has ample amount of data on the sexual imagery of the Neolithic, in paintings of copulation, female sexual/fertility figurines, and male figurines with erect phalli. In terms of “phallic figurines” (as in, a penis sculpture), these vary in size. There are the hermaphroditic figurines (which look like women with large buttocks or a cock and balls depending on the viewpoint, figures… ), the small little penis figures (symbolic amulets perhaps, figures…), and finally the actual, life-size, penis stones. It is these which, only recently, certain scholars have interpreted as literally being dildos. Previously, they were all placed under rubric of ‘ritualistic objects’ (meaning we don’t know what they are) and given the mysterious name bâton de commandement –because phallic objects *obviously* denote power. Such bâtons, some from the Paleolithic,  some from the Neolithic, are found across Europe. Many of these are inscribed with animal drawings, some including grouped fish (Kühan 1958, 95; Sieveking 1987, 83). The one from Gorge d’Enfer was interpreted by Marija Gimbutas as a phallic fish (Gods and Goddesses of Europe: 107).

Phallic figurines are found in the Neolithic Near East as well: 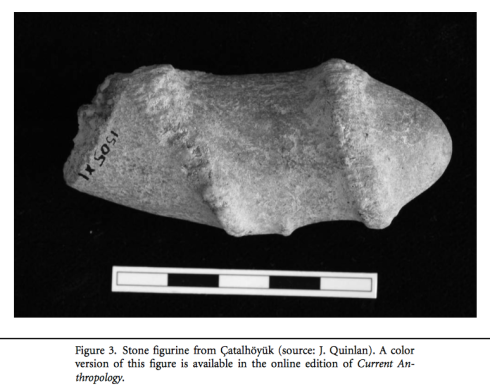 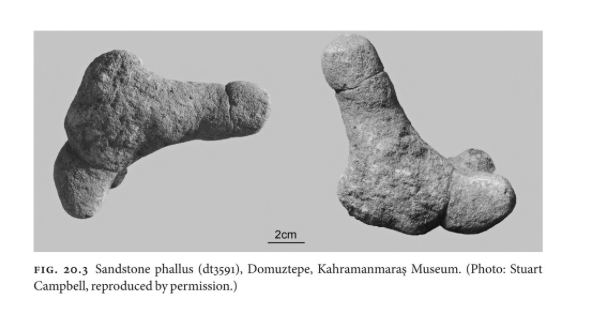 If archaeology is going to imagine without evidence, why imagine a violent and unpleasurable use of the object? Why not imagine that the prehistoric woman could actually enjoy her own bâton? Indeed, the Neolithic was characterized by much more communal values than our individualistic day and age, but people still had stuff (they were buried with stuff, such as figurines, indicating potential ownership).

Having established that prehistoric dildoes were a thing, here I have added the Jordanian fish to a line of bâtons, to show its similarity in dimension and shape:

The link between the symbolism of fish and the sexual dimension of the bâton can be provided by comparing this object to Yarmukian figures, for they are both fish-like, and phallic.

From around 5,000 to 4,000 BC, this Yarmukian culture swept over the Jordan Valley, with its own distinctive pottery assemblage, architectural style and its iconic figurines with coffee-bean eyes, large pointed fore-heads, and gill-like mouths. Some of “coffee bean” eyed figurines present large erect phalli. 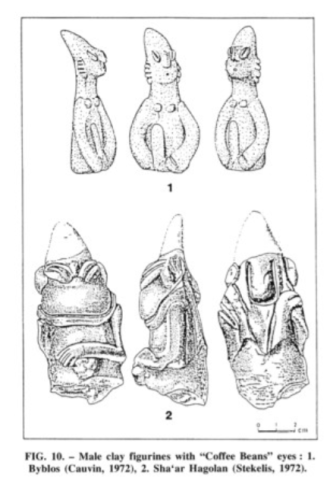 An interpretation for this extraterrestrial-like appearance I propose here is that these represented some kind of affinity between humans and fish, perhaps fish gods of Yarmouk mythology. In addition to the very human-like ‘fish-face’ figurines, the Yarmouk people also produced more abstract versions, called ‘pebble figurines’.  Without human appendages, these polished objects, some with faces, some not, have quite a phallic shape, especially when they are marked with a horizontal line.  The Yarmouk pebble figurines are the objects from river Jordan region which most resemble our stone fish.

Considering the symbolic aspects of fish, the phallic nature of the objects, and archaeological parallels from Paleolithic Europe, we can hypothesize that, like the stone fish, the Yarmukian pebble figurines were sex objects. Bullets, rather than dildoes.

The fish nature of Yarmukian figurines and of stone ritual/sex objects has greater ramifications. Painted frescoes from the Chalcolithic (period after the Neolithic) site of Teleilat el-Ghassul (4700-3700 BCE) portray people in ritualistic dress, with long heads that do not separate clearly from their necks and beady eyes. Perhaps these are fish priests (or mythical beings?), much akin to the later apkallû from Mesopotamia (compare iconography below). In seals and wall reliefs from the Assyrian period (BC), these are depicted watering trees, hence displaying the affinity between fish and fertility.

Mithen and colleagues (“Sexual symbolism in the Early Neolithic of the southern Levant: Pestles and mortars from WF16”) have found, as the title paper suggests, sexual symbolism in mortars and pestles. Yet these have a phallic shape for functional reasons: pounding grains! The fish, on the other hand, has no functionality whatsoever. It is a symbolic object, and its phallicism is therefore no coincidence.

Contra Hodder and Meskell (2011), who argue phallocentrism means privileging maleness, depicting the phallus does not necessarily mean there is an emphasis on masculinity. The phallus serves the woman as much as it does the man.

Archaeologists, especially the English ones, are afraid of talking about sex. Perhaps they fear going into the territory of the obscene, the extrapolatory, the pseudo-scientific, as I may have in this essay. Some will undoubtedly shake their heads and attribute all my interpretations to some odd fetish of the author (if the author were a man this would not be an issue). Yet how can we talk of an archaeology of the senses when there are no senses involved?

It’s a dry place (50-150mm of rain per year). It gets really hot (30oC on average). The only sea there stings one’s eyes with salt and is virtually unswimmable. No doubt, the inhabitants of this environment could get quite bored.

Some sexualized images of fish to finish: 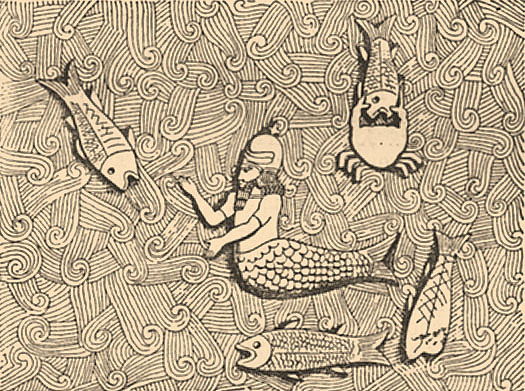 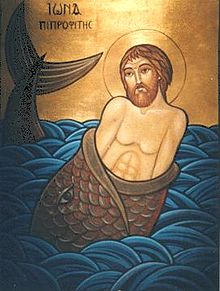