Femicide– the killing of women because they are women—is universal in human societies. A cursory glance at gender anthropology shows that even in the most egalitarian societies, women are degraded and shamed for their sexuality, denied access to certain privileges, and their freedoms controlled.  While there are excellent studies on the complexity of woman’s position in patriarchal society, and feminist resistance movements beyond the western world, it is still essential to acknowledge the basic fact: la femme est née libre, et partout elle est en chaînes—be these forms of physical, moral, or social bondage.*

Femicide in the Middle East is often explained by recourse to the concept of ‘honor’ or decontextualized quotations of Quranic verses. Yet, while honor killings do exist, they do not explain all gratuitous murders of women. Honor killings exist only in relation to a family/tribe; by bringing shame upon herself, the woman has shamed the tribe, and in order to restore honor they must destroy the source of dishonor. Murders of prostitutes (or so-called ‘whores’) sanctioned by unrelated on-lookers (‘kill the whore! kill the whore!) have nothing to do with protecting tribal honor.

Rather, femicide occurs in the Middle East for the same reasons it occurs elsewhere: because there is a universal culture of hating women who defy social norms by making themselves prominent in the public space. Femicide is about erasing those whose mere existence openly resist set roles: a woman who is not docile, submissive, and most importantly, accepting of her inferior position inspires the wrath of those whose superiority is questioned. 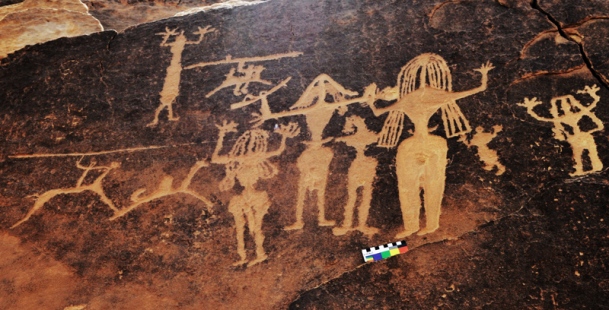 “Manliness is an eminently relational notion, constructed in front of and for other men and against femininity, in a kind of fear of the female, firstly in oneself”

The primordial origin of violence against the female is the fear of otherness, which becomes anger of otherness when the other possesses something we don’t. The ability to give birth, nourishment, and heterosexual pleasure are natural capacities which women have—there is not only a relation of want, but of need between man and woman. And it is this need which provokes ire, for it challenges man’s superior position on the social hierarchy. How can one truly be superior if one depends on one’s inferiors for basic natural needs?

Though Gimbutas’ argument that the Neolithic brought in the end of goddess worship and the rise of masculine religion has largely been debunked, there are clear instances in art and literature in which men attack either goddesses or priestesses for the fact they are women. The rock art above has been interpreted as women cheering men for war or as slave-girls being raided for booty (Macdonald, Goddesses, dancing girls or cheerleaders? Perceptions of the divine and the female form in the rock art of pre-Islamic North Arabia). What has not been considered is that these are representations of goddesses (which would be normal, due to their large size, and the fact the pre-Islamic Arabian pantheon was headed by the goddess Al-Lt).  Their large size, flowing hair, ondulous bodies all symbolize their greatness with regards to tiny masculinity represented by the riders. Yet they are the ones who are being physically attacked.. Even the divine, when female, can be conquered and raped by mortal men– the hole in the vulva of the bottom photo was possibly made to increase the fallen goddess’s humiliation: a symbolic gang-rape on the idol of the past (the rocks below her being a support for small human men to sexually attack the large rock carving).

There is literary evidence for pagan priestesses being physically attacked. In Kitab al-Muhabbar by ibn Habib al-Baghdadi (translated by A.K. Beeston), priestesses from Arabia celebrating the death of Muhammed– a man who openly criticized their religion—have their hands chopped off. The fact that the caliph felt so challenged and enraged at this harmless act miles away from the city testifies to the fear singing women inspire in men.

When the Prophet of God died, the news of it was carried to Hadramaut by a man of Kulaib of the Bani Amir ibn Auf (…). There were in Hadramaut six women, of Kindah and Hadramaut, who were desirous for the death of the Prophet of God; they therefore dyed their hands with henna and played on the tambourine. To them came out the harlots of Hadramaut and did likewise, so that some twenty-odd women joined the six.
(…)

Tell Abu Bakr when you reach him that the harlots have desired most eagerly, and shown joy at, the death of the Prophet, and they have dyed their hands with henna. So strike off their hands with a sword sharp as the lightening which flickers in the banks of clouds.

When al-Muhaghir read [Abu Bakr’s] letter, he gathered his horses and men, and proceeded against the women, but certain men of Kindah and Hadramaut intervened between him and them; so he expostulated with these men, but they insisted on fighting. Then their people retired from him, and he did battle with them, and took the women and cut off their hands; and the women’s partisans were killed, and some women fled to Kufah. A man of Hadramaut wrote this verse reviling a man whose mother had been smitten on this day– ‘Your old woman was smitten in Tarim as the mother of Saif was smitten in Mashtah.’

The letter informing Abu Bakar of the event creates an intriguing juxtaposition between the joyfulness of feminist paganism (‘shown joy’; ‘died their hands with henna’) and its violent male censorship (‘so strike their hands’). One cannot but read cowardliness at the force directed against these oh so dangerous dancing women. The fact they are specifically called ‘harlots’ (بغاية) and ‘prostitutes’ (آواهير ), when they are not at all engaging in any sexual but only singing and dancing, is the all too universal male tactic of sexualizing and thus diminishing the political and artistic output of women.

Another literary example of femicide is the story of the ‘heroic’ Bahram Gur, Iranian shah, and his hunting trip with his favorite Greek slave=girl Azada —a singer. When he kills an animal in an extremely merciless manner, and the girl cries in horror, this is such an insult that he murders her even more grotesquely.

The gazelle immediately scratched its ear. At that moment he fixed an arrow into his bow and with it pinned together the creature’s head, ear, and hind leg. Azada’s heart burned with grief for the gazelle, and Bahram said to her,
“How is it, my pretty one, that you release such a stream of tears from your eyes?”

“This is not a humane deed” she replied. “You are no man; you have the spirit of a demon.”

Putting out his hand, Bahram dashed her from the saddle headlong to the ground and drove the camel over her, bespattering her head, her breast and her arms and the lyre with her blood…
The girl died beneath the camel’s feet, and never again did he take a girl with him when hunting.

Scholars (m) have deviated from the claim of misogyny by variously explaining Azada’s murder as punishment by the pious Bahram Gur for pronouncing the name of the demon Ahriman, or even as a moralist tale of caution to the shah to not mix in both hunting and love-making. ‘If any lesson was to drawn from this story, an obvious one was that male appetites, which can hardly be suppressed, must at least be held in balance. Pleasures by nature irreconcilable must not be mixed. It is not women as such that are the problem, but men’s tendency to be distracted by them, and led into excess’ (Garth Fowden, in Qusayr Amra).

The position in this quote ignores any role Azada had in her fate. It was the fact that she spoke her mind, instead of fulfilling her duty of singing Bahram Gur’s praises, that enrages him. Defying social order is punishable by death.

The haunting 2005 Syrian film Bab al-Maqam dramatizes the true story of a woman murdered by brothers and uncle for becoming infatuated with singing Oum Koulthoum–  undeniable proof she was an adulterous. Taking place in Aleppo of the early 2000s (a ghost of a city for the post-civil war viewer, making the film even more chilling), it reveals the ideological equivalence between singers and whores. The film intelligently plays with the all-too pervasive cliche of ‘fallen women cinema’, with its either redemptive or punishing moralist ending, by emphasizing the heroine’s modesty, shyness, and devotion to her family. Whether she sang at a strip club, or, as is the case, alone in her bathroom, it did not matter to her killers: the fact was that she was singing, thus, she was a whore.

Femicide in the Middle East and the broader Muslim world is usually seen as a category apart from the worldwide phenomenon: it is explained as ‘honor killings’. Such killings, which do exist as well) are in fact only a small proportion of all femicides: the killing of an Islamic Law student in Afghanistan had nothing to do with ‘honor’, nor did that of Benazir Bhutto. While there may have been different excuses given to these killings (religion, politics), they are part of a culture of misogyny. Men take pleasure in inflicting violence (or seeing it inflicted) upon powerful women: prostitutes and independent women called ‘whores’, defy their idea of a docile, chaste, woman. Hence the popularity of the‘kill the whore’ theme in cinema.

There is a vicarious satisfaction to seeing powerful/artistic women being lynched, just as there is to the cinematic portrayal of rape, which is explained by Das Gupta :

It is obvious that whenever rape is made attractive, the male audience is asked to gather vicarious satisfaction. It is analogous to the cry of ‘kill him, kill him’ at boxing matches (…) Only the rapist, that is, the criminal  is allowed an open expression of the animal within us. If you get a secret, vicarious satisfaction from watching the act, there is no need to talk about it. The chorus of disapproval will drown such talk anyway.

The analysis is potent in pointing out the vicarious satisfaction of rape, yet rather than compare it to a boxing match (in which two equals of strength compete in manliness), rape is like femicide. It is analogous to the cry of ‘kill the whore, kill the whore’, when the whore is a defenseless by-stander, and not a willing competitor in an arena. The vicarious satisfaction is in in the male trampling of the feminine, the confirmation of male domination over the female by the annihilation of she who defied male superiority.

Male rights activists will argue ‘more men are murdered than women’, similar to the whine ‘the police kills more whites than blacks’. Men who kill men are doing so for a specific reason:a brawl, jealousy, theft. There are also ideologically-driven male on male murders such as targeting homosexuals or specific races, but these men are feminized by their oppressors. Never would a man kill a man for singing– unless he was singing in a feminine manner. In revealing the female in the male, he is defying social order, just as does the mere existence of powerful women.

*(I am aware that ‘man’ and ‘woman’ are not universal categories, gender is socially constructed, and there is fluidity between the two (or more) genders.Here I am concentrating on a general phenomenon: to not recognize the general binary of the sexes is completely ludicrous –99% of the population is born with genitalia that falls into one of two categories. And though the social differences between the categories may vary from society to society,  the fact of difference itself is always recognized.).